Where do I start with the famous Caddy van of Steve’s!!? It shows how much Steve loves caddying and his dedication to the job!

In 2010 he bought a VW T4 Camper Van, but a top spec model, it’s amazing!! It has so many names for it given by players and friends and a few are listed below!! 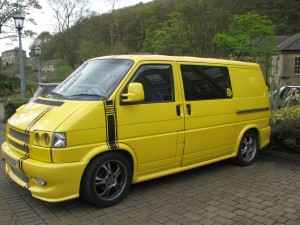 Steve’s idea was to travel the country and sleep in it at all the events when caddying, for 2010 believe it or not we both stayed in it! It was very cosy but it really saved some money, we cooked in the van, slept in the van and used the golf clubhouses to shower each morning. Bit like the Ian Woosnam story.

It was great but for 2011 I decided if I was to give the Europro another go I had to give myself the best possible chance, so I now sleep in cheap hotels or rent a house with some other players and Steve uses the van as normal.

But in the time when we both stayed in the van we had some fantastic tales to tell….

It was past midnight in the carpark at Wychwood Park Golf Club, we were playing in a PGA North Region OOM event with an early tee time the following day.

Like I said before, it was pretty cosy in the van and we had managed to get off to sleep.

In the carpark someone had left a Porche Boxster parked up, for some reason the alarm kept going off and each time woke myself and Steve up. So wide awake Steve decided to pop outside for a ‘pee’ – but when the van doors open the hazard lights flash and the blue disco lights around the doors also come on!

This was all on the security cameras and we soon had the security guards knocking on the van door to see what was going on….. Oops!

Playing at Lingfield Park on the 2011 Europro Tour season, myself and Matthew Marsh were staying in the worst Travel Lodge ever! Gatwick Airport, it had sealed windows to cut plane noise out but that meant it felt like a sauna!

The last night Steve parked up in the van around the corner with the lorry drivers. The same time London was in the midst of the biggest riots ever.

Late that night Steve was woken up by the local Gatwick Airport Police Bomb Squad. He was pretty intrigued why a guy was sleeping in a yellow van in a layby with a 9 iron next to his bed.

Steve soon explained why he was there and he then had a problem of getting rid of the policeman and getting back to sleep as he was a keen golfer and wanted to know all about what Steve and myself did!!

This was at the beginning of the 2011 season before I decided to stop staying in the van. We were at Wharton Park Golf Club playing on the Jamega Tour.

We parked about a mile away from the course in a local picnic area and settled in for the night. Once again in the early hours we had bright lights shining through the window and the police knocking on the van door!

Having to explain ourselves once again they where happy to leave us there and we soon fell back to sleep in preparation for the first round the following morning.

But that was not it….

The following morning we woke up to 5 police vans parked next to us! Oh dear!!

Luckily it was nothing to do with us, but of all places to park we decided to park at a police traffic patrol area where they were bringing cars off the road to check them. 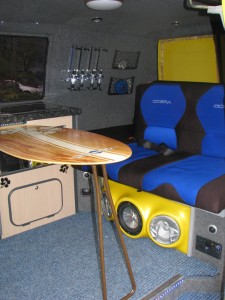 Steve loves his van, but so does everyone else!!

We parked up on the driving range at The English Challenge Tour event at Stoke-by-Nayland next to the Titleist Tour truck.

The van doors where open, the kettle was on and we had a steady flow of players calling in for coffee, tea and biscuits.

Everybody wanted to see how the van worked, check out the disco lights, the optics and quiz Steve on life in the van!

I think next time there will be a price list hanging down from the door as people arrive!

The above is a nice selection of stories of life in the van and I hope you enjoyed them… I will always add more if there is some good gossip to tell!!

Also, if you ever see Steve driving around Huddersfield or Halifax then give him a beep and a wave. He loves how all the camper clubs wave at each other – no comment from me on that one!