Wow, how much easier have ISM made this experience for me. Second passport in place, Indian VISA in place, flights booked, practice booked and hotels booked.

Itinerary emailed through and I’m ready to go….

But there’s more to it….

I thought that my category from winning the Europro OOM last year would get me straight into the event, as it would have in 2011. This year was different, the event was a week later and clashed with a different European Tour event.

With the event having a reduced field and been co-sanctioned with the IndianTour there were only 60 Challenge Tour spots up for grabs.

At the date of closing, two weeks prior to the event, I ended up 6th reserve. A bit gutted and obviously anxious about booking my flights and hotel in case I did not get into the event – ISM still put everything in place and we just sat quietly waiting for the email saying I’m in the event.

6 days later I was down to 1st reserve and decided to travel, hoping I would get into the event whilst en route. I did!! En route to Heathrow I received a call saying I had got a place in the field so I was over the moon and so was Bob!! #gameon

Bob Whiteley, a good friend of mine from Meltham GC, was kind enough to travel with me and support me for the 12 days we were away. To have a friendly face with me for the journey makes it so much easier. And also to have Bob there to get away from golf after the round to switch off is a massive advantage.

Then fly onto Ahmedabad via Mumbai for the event at Kensville Golf Club.

After practising very hard on my game back home, I’ve just not had the chance to get out on the course due to our lovely English weather. So having the option to play some of the best courses in Dubai and use their fantastic practice facilities felt the best way to prepare for the Indian event.

It also gave me chance to adjust totime differences andnot be as fatigued as I would be by flying direct to India.

What we got up to…

Dubai certainly is an amazing place, I would not holiday out here or want to live out here but it has to be experienced! The buildings are incredible! All of them!

We visited the Jumeirah BeachHotel, the famous Burj Al Arab(sail), The Burj Shalifa (currently tallest in the world) and two of the biggest shopping Malls in the world. One having a 400 metre ski slope inside!

Everything they do they seem to give 100% and throw loads of cash at it! 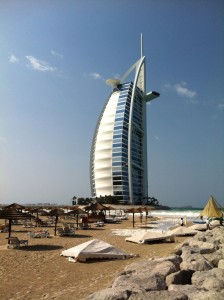 Over the three days myself and Bob spent 2 at The Els Club, and one at The Emirates Club. Both had fantastic facilities and seem to be a golfing heaven to some of the best players in the world.

Marc Warren, Soren Hanson, Peter Hanson, Rory Mcilroy, Lee Westwood, Chris Wood where just a selection of some of the players choosing to practise in Dubai this week.

And once you see the courses you can really understand why. As well as practising, myself and Bob managed to play The Els course in what was apretty testing but enjoyable wind.

Following a final day’s practice at The Emirates we headed back to the airport for the long journey to India. 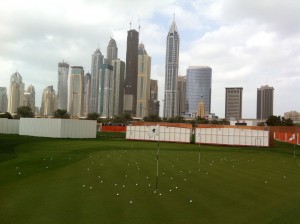 The flight was only just over two hours to Mumbai but with a ‘nice’ 4 and a half hour wait in Mumbai airport before a connection to Ahmedabad, it made it quite a drag.

Landing around 3am the following day we thenhad a 1hr.40 min drive to the hotel arriving at around 6am, and got straight to bed for a good rest ready for a long tournament week and my first Challenge Tour event as a full member of the tour.

En route to the hotel it was quite an eye opener, hundreds of people asleep at the side of the road, children wandering the streets and every now and again someone walking a cow in the middle of the road.

On arrival at the hotel even at 6.30 am it was pretty nice but we were soon to find they only had 50 rooms and only 7 twin rooms. So that meant myself and Bob had to share a bed… At least it was a King size!!

In terms of layout it was very similar to a members sort of course back home. It did not play too long and had not much trouble. The only protection being that the greens were as firm as the runway we landed on in India!! And the slopes on them were crazy!!

I kind of liked it but firm courses are not my favourite, I do like soft lush grass but you can’t choose so I just had to do my best with what was in front ofme.

If you like curry then as you can expect, it’s the place to visit. If you wanted you could have it for breakfast, dinner and tea!! Some days I did. But they also put on some pasta dishes and sandwiches so you could always find something you like.

The fresh naan breads where unbelievable straight from the hot stove!

Anyway, the work side of the trip….

Rd 1 – for my first game back out since mid December I felt that I scored ok. The course was tricky and the scores proved it. So to have three birdies to cancel out my three bad bogies and shoot 72 (level) was quite acceptable.

Rd 2 – I think I summed this round up well by saying my good was average and my bad was ok!! I never hit the ball close enough and the odd time I did I three putted for my only bogey of the round!! 73 (+1) to easily make the cut of +4 and see myself through to the weekend and onto the CT OOM after 1 event.

Rd 3 – the wind picked up a little today which made the scoring pretty tough! I played pretty solid for most of the round and to shoot 73 (+1) moved me up 8 places to 22nd.

Rd 4 – another day of that tricky wind but in a differentdirection. The highlight of the round was an eagle 2 on the 3rd holing out from 118 yards. But worst bit of the round was a poor finish to slide down the leader board back to 30th place.

It’s been a great trip and the result I suppose has not been a bad one. My first event as a Challenge Tour member and a cut made, finishing top 30. 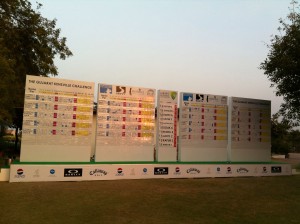 I’ve played with some great guys throughout the week,given it 100% all week in everything I have done and can fly home happy knowing that!

A massive thank you to Bob Whiteley for his support, company and caddy skills for the whole trip. He’s made it a lot easier for me as it can be a very lonely place out here.

I have just written the end of this blog sitting on an Air India flight, in 24 hours of travelling I will be back home!!