After getting pretty sick of the cold/wet English weather, myself and my coach Mark Pearson decided to plan in some warm weather practice in Portugal, (Pinheiros Altos).

For me it’s something I have never done, so to have some productive coaching on fast greens is key as its always been a part of my game I have struggled with.

Another one of Mark’s students, Matthew Marsh decided to join us, as did Jason Wood from the Nike Golf Academy, so it was set to be a great trip with two competitive (and highly amusing) games of golf overthe two days!!

The Thursday morning was spent on the putting green working on my setup and putter face control. To do this I have started using mirrors and the ‘Yes’ putting rail. It’s torture!!

From there that set us up for what ended up being one of the funniest rounds of golf ever! A fourball better ball game of coaches Vs students incorporating the highly amusing ‘snakes & camels’

Snakes being three putts costing the person at the end with the last three putt, €3 for each of three putts throughout the game.

Camels being the highlight of the day, similar rules, it cost €3 per ball in a bunker and the player in the last bunker paid out for them all.

Playing the last hole Marshy had 12 camels and was pretty worried about paying out! Pearson was chipping his way up the fairway avoiding bunkers quite embarrassingly as Woody was playing it the correct way.

Woody missed the green slightly right but safe and from there proceeded to chip it across the green catching a slope and rolling off into the last bunker on the course! It was priceless, it cost him €39 and took 5 minutes for the rest of us to come round from laughing!!

Day 2 was a morning of shortgame, since working with Mark the variation of shots I have learnt has been incredible and I learnt more in Portugal! Horrible little sandy lies were all you can think is ‘duff’ and to play the shot straight away on the 1st was brilliant. 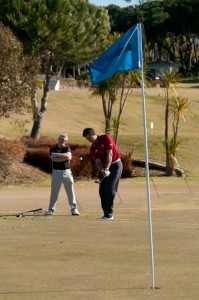 After lunch we played another amusing game call Vegas where you changed partner every hole! It kept it interesting and meant that Mark could not chip his way around the course avoiding bunkers!!

I can’t explain it better than that!! But the camel and snake count was once again high and it cost Marshy a few quid!!

Overall it was a great two days and I got a lot out of it!! My game is in pretty good shape and I can’t wait to get out to Columbia for the next Challenge Tour event!! 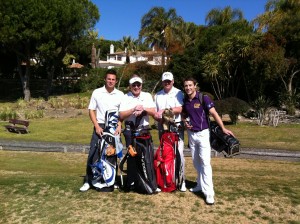