In a nutshell, over one thousand people enter each year and 30 people gain a card for the 2012 European Tour Race to Dubai season!!

It starts with Stage 1 based throughout Europe at 8 different venues, the top 20% then progress to Stage 2 and meet exempt players from the Satellite Tours (such as Europro) and the Challenge Tour.

Then over 4 venues in Spain the top 20% progress onto the Final Stage which is now at PGA Catalunya near Girona, (most people remember it being San Roque).

240 guys compete here over 6 rounds to battle it out for the 30 spots and the 2012 playing privileges!

My European Tour Journey started a bit later this year than previous years as my position on The Europro Tour in August gave me exemption to Stage 2. That’s a massive bonus as the first Stage is just as tough and you still have to pay the crazy £1350.00 whichever stage you start at!!

So…. El Valle near Murcia was my allocated course and this year I planned to be better prepared than ever.

Two weeks prior to Stage 2 I made my way out to Spain to play on the Hi5 Pro Tour (www.hi5protour.com) at Altoreal GC also near Murcia, (see previous blog). This was perfect as I got to have three extra days before the event planning and practising at El Valle.

This place is brilliant, definitely up there in my list of top courses! 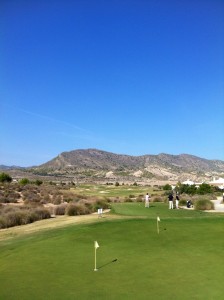 For those three days I walked the course studying the greens, played 18 holes and chipped and putted to my heart’s content! The setup is fantastic and the course is outstanding!!

Everygreen must have 4 mini greens in it, if you’re out of position you’re not making par never mind birdie!! When it comes to the event it’s going to take a lot of patience and some sensible but very good play to get through! 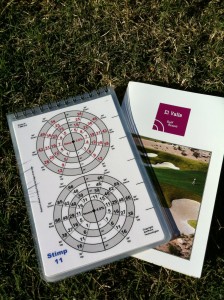 Round 1: The weather was perfect and I played some real nice stuff! Just two bad shots cost me 3 shots out there and with the only birdie on the 1st I carded a round of 73 (+2)
The putter was really cold whenever I had a decent birdie chance, so if my game improves each day I will still be in with a chance come the end of stage 2.

Round 2: Ouch!! That round hurts! You never want to go backwards in the field. After getting to -3 after 6 holes and to finish +3 is really bad!

I played some great stuff around two really bad holes of golf! Very disappointed to say the least! Need two low ones now!!!

Round 3: Double ouch!! After getting a good score going through the first 6 holes and then to fall back and finish really badly for 76 (+5) was to say the least very hard to take! Once again I gave it 100% and never gave in.

One of my sayings for the week was – “finish as high up the board as I can whether it is 21st or 61st!

Round 4: Today was a reverse of the other 3 rounds, I started poor but conquered some demons on the front 9 of the course which was my back nine to claw it back and shoot 73 (+3).

I have a lot of good stuff to take from the round once again, and it’s fair to say a good few things to address this winter and keep my game going in the right direction!

Overall round up: My game was nowhere near where it had been throughout the year and a course like El Valle has highlighted a few areas of my game that need to improve to compete with the best.

I really am looking forward to the challenge of improving these areas and will work hard throughout the winter to make sure this happens.

It looks like the first Challenge Tour event will be in India around the 20th January so I’ve got a few weeks either side of Christmas to get my game to where I want it to be.

Thank you all for the support

Hope you enjoyed the blog and my Tour School journey!