It’s unbelievable how fast the season goes, especially when you’re playing some good stuff and you don’t want it to end!

But I don’t have any grumbles as you can probably imagine and I would not have done anything different if I had chance. I’ve learnt a lot about myself and my game over the last few years and with help from friends, coaches, and family I managed to bring it all together this season.

After a hard winter in 2010/11 I really felt ready to get going again on the Europro and with disappointing 3rd rounds to the first two events I fell back down the chasing pack to finish 30th and 40th respectively!

The next event (Bovey Castle) I again got myself into a decent position after two rounds and went out in Rd3 with the only goal to move up the leader board, not down!

It was awful weather, wet and windy and Bovey is not the place to be in those conditions. I was really patient and had a steady front nine of a couple under. It then all clicked, my focus was great and concentration as good as it’s ever been!

I came back in -5 for a round of 63 (-7) to win by one shot from Dale Marmion and win for the second time at Bovey Castle. It really does have a special place in my heart, it’s an amazing place!

Steve (caddy) was brilliant on the bag and made such a difference to my performance that week! I’m lucky to have such a good caddy as nobody else on the Europro does, and I’m pretty sure the European Tour too!

From there I followed that result up with a T4th at Longhirst, I was leading by 2 with 9 holes to go and just a few weak bogies meant I fell back. Not a bad way to follow a win though!

The next week on the Europro was, I think, the highlight of the year. Galgorm Castle in Northern Ireland. I had Steve on the bag, my Mum and good friend Sue Kaye were out to support and the following weekend Laura and Tracey (Steve’s girlfriend) were meeting us in Dublin.

The course was set up great for me and Steve felt the same too! (He put a sneaky bet on me that week winning over £400). I played great all week and again shot -7 in the last round to get into a playoff with Graham Clark. 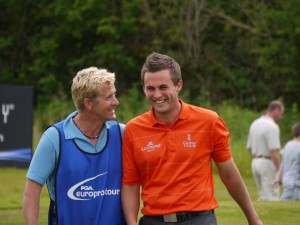 In the 2 hole playoff I hit two of the best shots of my life and that same focus from Bovey helped me stay calm and win the playoff with two birdie 4’s up 18!

Two wins in three weeks! WOW! Now that felt good and we had an amazing weekend exploring Ireland with the girls!

The following week I ‘MC hammered’ as its sometimes known for missing the cut! Not ideal but I think I was more mentally tired and drained from the last three weeks golf.

That week at Fota Island was soon forgotten and I then went on a run of 5th, 6th and 3rd to move clear on the OOM.

My golf was still improving week in week out and my only aim was to give myself a chance each week and give it 100%, which I certainly did!

It was then the week of Mottram Hall and this week did help my scoring average!

I played in a pro-am at Hallowes the Monday and shot -5, the Europro pro-am at Mottram the following day shooting -7 to win. And then followed that with scores of -5, -9 (CR), -1 to win my third Europro event of the year!

Again it was a fantastic event as nearly all my family and close friends were there to support me throughout the week. I just really wish I had my dad there to see it all too. He has seen the DVDs but as you know it’s not quite the same.

He was a massive inspiration to me and taught me so much about the game it would be so nice for him to have been able to travel this year with me!

There was then a little break for the Europro Tour before the Tour final in Spain, and in that time I picked up my first ever sporting injury!! I did not get to practise much before the event but scrapped it round to finish T10th.

Again the family were out to support which makes travelling and being away from home that bit easier!

It really was a good job the course was wide open and forgiving in Murcia because if it had been played at Moortown or somewhere tight I would have struggled to break 80 each round.

But anyway that result rounded up a great season on the Europro and another top 10 finish. It’s great to now know that I have now made some progression from that Tour and I can’t thank everyone enough who has helped along the way to make it happen! 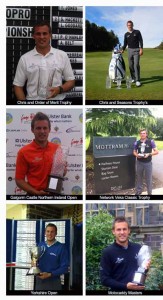