So, it was back to Spain for the Spanish Open on the European Tour, and with France last week not going to plan, I thought I may as well head to Spain once it started to look like my category was going to get me into the event.

At close of entries for the event I was approximately 30th reserve, and with a week to go I was still 19th on the waiting list, but that’s how frustrating the entry lists can be. I knew I had a chance – with many spots from the Alfred Dunhill event being held back for Spain they were 99% likely to go back to the field and then all the other names above me from the Challenge Tour were likely to commit to playing on the CT in Morocco and not travel to Madrid.

So, at about 10th reserve, I booked a cheap flight for myself and Adam (caddy) as the odds were heavily in my favour.

Of course, I lost some money on my return flights from Morocco, but that’s not the first time that’s happened this year, and I dread to think how many flights I’ve missed and wasted throughout the year/career.

Now accommodation was tricky; with the official hotel close to the Bernabéu stadium and with Champions league football also on that Tuesday, it meant a lot of options were booked up and if they weren’t, they were extremely expensive.

I ended up with a cheap hire car and a small, reasonable apartment 20 minutes away from the city and the course – well out of the way of any other golfers!

And due to the price of booking for the whole week I actually only booked for three nights in case we missed the cut…God forbid!!

The only other affordable options were a selection of hostels in the city, but I’m not too sure how good the preparation would have been in a shared room with another random six tourists!

So off we went Tuesday morning: Manchester – Madrid!

I certainly have a soft spot for Spain, so it’s always nice to go back there, and from what I’d heard it was a great golf course too.

With the pro-am taking up any chance of playing the course Wednesday, it meant rushing straight out on arrival Tuesday afternoon with Nick McCarthy to see what we had in store for the week.

The 1st tee was closed from 3pm, so that meant walking out to the 2nd and playing on from there, but after nine holes I called it a day, for me rest was important and I had the whole day Wednesday to walk the back nine and practise.

We rushed back to check in at our apartment for the next three nights, and you will soon read that booking accommodation was not our strong point last week!

On arriving at the ‘Aparthotel’ we were soon informed that the booking was actually for a double room, not a two-bed apartment…. and the room didn’t even have room for an extra mattress it was that small!

Thankfully, someone had checked out of an apartment,which hadn’t yet been cleaned, they didn’t want to let us have it but I had no issues in stripping the beds myself, throwing out the dirty towels and making the beds up again for us.

Anything to not have to sleep with Adam Walker!!!!!

Round one we were last out of the morning groups at 10.30; I played pretty solidly all day, stayed extremely patient, and if anyone knows Adam, you’ll know how good he is at keeping me positive and pushing for birdies.

So, to finish on the 9th with a birdie two was very pleasing and of course great to sign for a 68 (-3) – as you’ll know, my first rounds haven’t been a strong point this season.

So last out in the morning day one only means one thing…last out day two at 3pm with a morning of time to kill. We packed up, checked out and headed to Starbucks for a morning coffee before heading across to the course.

I also had to book some more accommodation – if I made or missed the cut that night, we had to stay another night anyway, as we finished the round nearly in the dark and wouldn’t have made any evening flight.

Off the course at 8pm, after a battle of a back nine to make the cut on the number, we then headed straight for dinner, and then back into another local village to find our accommodation for another night and also book a Sunday night flight home which also wasn’t easy – wow, the room was small too!!! Thankfully two beds!

So last off the course and last player to hole out at 8pm Friday, I was then the first player to tee off Saturday morning at 8.50am.

But it was a round worth getting up for, as they call it ‘Moving Day’ and I thankfully made the move in the right direction. I played lovely for a bogey free 66 (-5) and climbed the leaderboard about 30 spots after birding the last!!!!!!!

As a two ball first out, we were round in 4 hours and back in for an early lunch and to hopefully find some more accommodation for the last night – should be easy enough in a city you would think!

Well it wasn’t, Real Madrid were playing AGAIN. I use booking.com for 99% of my travel and I’ve never seen the map on their website so full, there must have only been 5 or 6 available places, and these ranged from a bunk bed in a 6–bed mixed hostel for €200 to a penthouse apartment at twelve thousand for one night…it was crazy!!!

Thankfully Adam came to the rescue, he found a hotel 1 mile walk from the official players’ hotel for €160, so we had to go for that! We got a courtesy car to the players’hotel and set off on a sweaty walk to find our beds for the night.

Thankfully a happy walk after the 66!

We were so pleased to walk into the air–conned hotel reception only to then have the smiles wiped clean off our faces – Adam hadn’t come to the rescue at all, he’d booked for the Saturday night in two weeks’time…ouch!!!

So immediately back on the web I found something 3 miles away for €180, but now we didn’t have our car! We decided to set off and walked for a couple of miles,finding a TGI Friday’s restaurant en route for dinner next to the Bernabéu stadium. 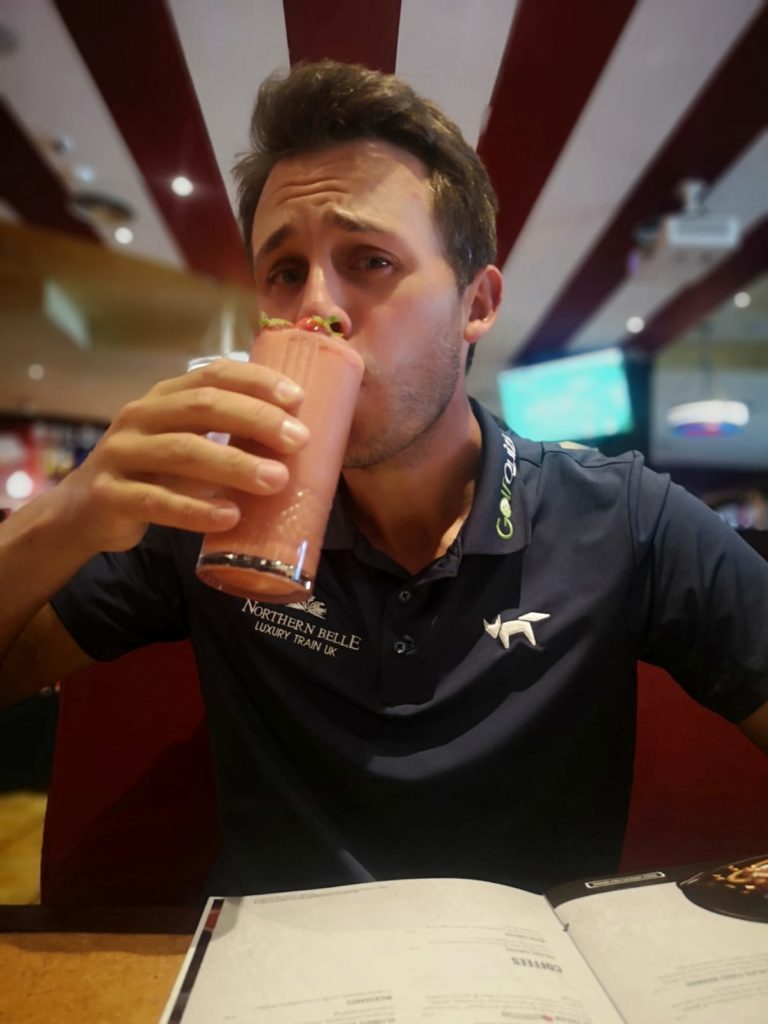 We then finally found our new hotel and crashed out for the night dreaming of birdies for the following day!!!

Sunday we were out in the thick of it at 11.02am, the crowds were crazy, it was extremely busy and with many holes passing each other you could hear the Spanish roars for Rahm, Del Val and Bello everywhere.

A steady start but a bogey on 6 was not the first score away from par I wanted. But then a world class up and down on 7, and a perfect wedge into 8, meant I went birdie birdie and was under par…a chip in on 10, then some really good scrambling over the next 5 holes kept my momentum going.

Am I happy??? Of course, after missing the cut in France last week when I felt to play some decent stuff, it was good to then back up some good feelings in Spain with a strong showing on the main Tour!!

As ever a huge thanks to Adam Walker on the bag, he makes a huge difference not just to my game but to the enjoyment of being away and life on and off the course!

Also, thanks to Lee Sullivan for the support and process we have in place with my putting, it’s been fantastic to finally see my putting trending in the right way these last three months, also to James Thomson for being a rock to chat to and keep things real!

And to Simon Dyson for the work we’ve done together in such a small period of time which I feel is already contributing to some positive stuff in my game, there are not many people out there so motivated to help fellow players in their quest!

Roll on Ireland 🇮🇪 next week, and roll on Tour School in November!!!!!!!

But first we had to catch the 10pm Sunday flight back to Luton, of all places, to then hire a car and drive three hours back to Huddersfield, arriving home around 3am, all for the reasonable price of £600…… ouch! Travel probs!!! 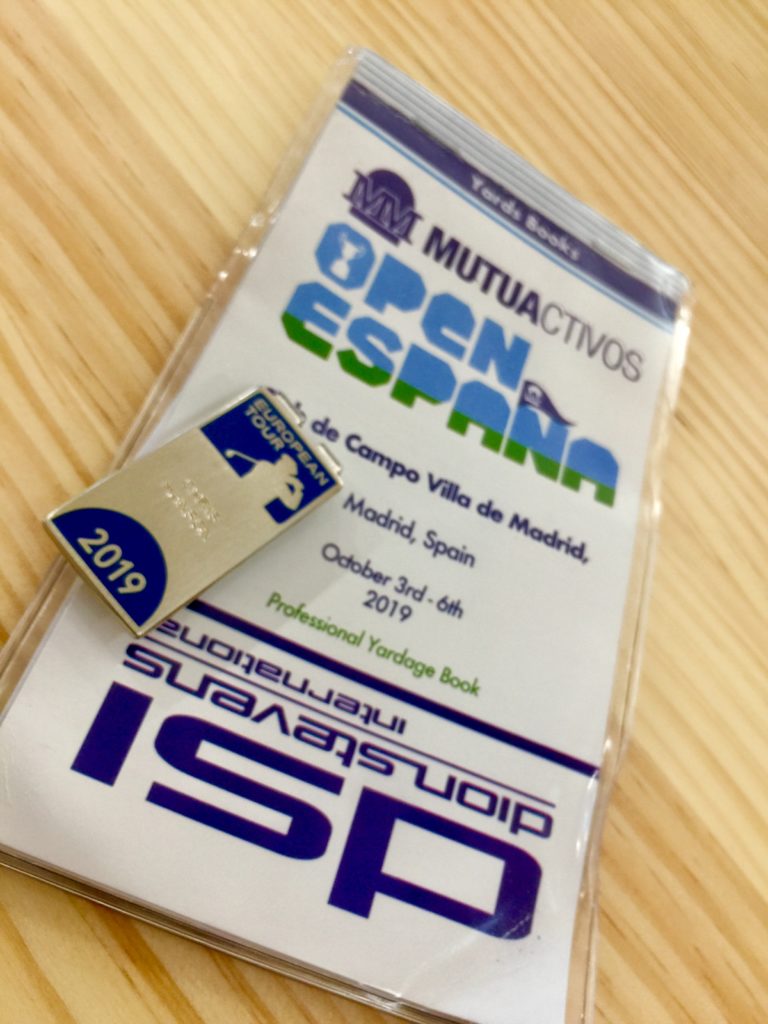