I don’t know why but the trip out to South Africa this time felt really long, but it wasn’t any different from past trips!

Two 7-hour flights and a 4-hour stop-over in Dubai broke it up…I managed to sleep on most of the second flight, so on landing I headed straight to the golf course to get some practice done.

The plan was to meet Steve in the airport, get to the course, have lunch, then work out some yardages, check the altitude and send some swing footage to my coach Mark back home!

But the plan slightly altered – for Steve anyway…he’s possibly got deeper pockets and shorter arms than me and in trying to save a few quid he had booked a four-flight journey to get to SA!

Quite some journey, but then he was told in Doha that his flight has been ‘over sold’ (this surprisingly happens quite a bit) and the only option he had, if he wanted to arrive Monday, was to fly to Namibia and then onto Joburg!!!

So five flights and pretty much 40 hours’ of travel, he finally made it to the course and not surprisingly was as happy as ever and not fazed by his marathon journey in the slightest!

He is probably the only person I know in this current day and age who could sit by himself for 40 hours with no wifi, no phone and not talk to anyone!! No one enjoys their own company more, and that’s a fantastic trait/skill to have as a player or caddy when constantly on the move around the world!!

It would be amazing to actually know how many hours we’ve both spent sitting in airports or on flights trying to pass time.

Back to the golf…

This week I was selected to play in the pro-am, and that worked perfectly for me to use it as my practice round but also to be able to have some competitive practice and try make some birdies!

I had a great team too, three brothers, all members at Glendower, all very competitive and fantastic company!

We shot -10 on the day, but more importantly had a really fun time and I managed to get some good constructive practice done.

And then me and Steve even managed an invite Friday evening to join their family for dinner at the local Italian, which was brilliant! 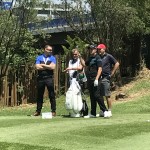 Pro-am with Steve and Duncan overlooking! 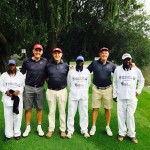 They didn’t want me in the picture…. boo! Haha 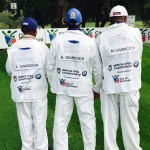 So, a little bit of light practice and physio after the pro-am and we headed back to our accommodation for the week!

Me and Steve have some great friends out in South Africa – Waleed and his family have once again put us up for the week; they live on the estate at the course so location is perfect, and this week they were actually on holiday till the Saturday, so for them to leave us their house keys and car is an amazing gesture, we really can’t thank them enough!

Glendower and BMW put on a great event here at The SA OPEN, the grandstands around 18 are outstanding, the hospitality is first class…but this year it was slightly different, there was a different feel to the event…

It’s Wednesday and the crowds are lining the fairways, you can hear cheers on the course like it’s a Sunday afternoon, and there is hustle and bustle everywhere…

…even players are stopping to watch a certain someone!!

Rory is in town!

We don’t think he’s on appearance money this week, the story that he’s playing in return for Ernie playing in the Irish Open last year seems pretty legit…

But I can tell you now…if you were here you would soon realise why the top guys in the world get paid big appearance money!

They drag in the crowds, and drag them in by the thousands…this week parents have taken their children out of school to see Rory as they may never see him again in SA, that’s how big a deal it has been.

That’s the sheer pulling power of McIlroy, and I would say only Tiger would draw a bigger crowd! 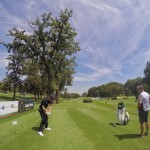 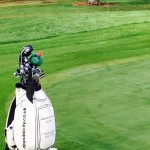 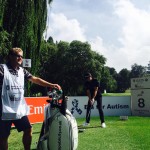 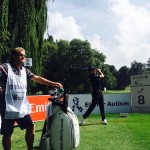 Ripping one in practice! 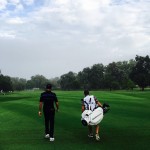 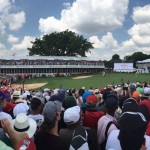 Amazing to walk up the 18th to this…. 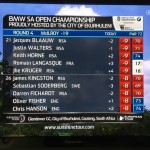 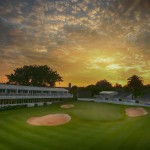 What a grand stand finish!! 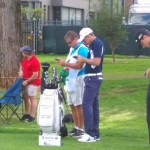 Photos thanks to Mel Booth, round 3, 6th hole! 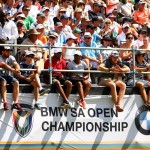 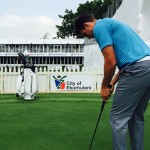 Check out the new bag…. 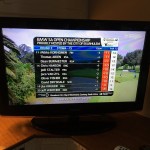 Sneaking up the leaderboard

So after three days’ preparation I was ready for another challenge. I really liked the course, the rough is that horrible Kikuyu grass – so you must avoid it – and the fairways are really tight too!!! You get rewarded if you drive it well as there are plenty of chances from the fairways with the greens being so pure and very receptive!

I got off to a nice start in round one playing some really steady stuff, I was -4 through 13 holes and cruising along, but I hit a poor shot into the 5th and deserved to make bogey, so that was fine, but then to find the water with my approach shot on the 9th, my last hole, and make double was very disappointing!!!!

So a sour taste to my round but overall a great start to the year and nice to post the first sub-par round of the year, especially when I’ve not really been on grass for four weeks, and I’ve only played twice…

Round 2, I knew the scoring would be similar so I had to go out and post a number, the cut was going to be level at worst and in the end fell at -1…but I was there to press up the leaderboard, make a charge and really compete this week!

Again a pretty solid all round performance, a couple of poor bogeys, maybe a little bit of winter rust or a few bad decisions, but that will only improve with playing more! After 15 holes we got called off the course for thunder and had to resume the following morning, and looking back for me that may have been a good thing… after a shocking three putt bogey on 15 my head needed clearing to play the last three.

On the return I started with a bogey but made a great birdie up 18 to feel a lot happier about my round and pretty content with 69 (-3).

We had just under two hours’ turn around and went back out to start round three. I played lovely and to post a 66 (-6) with no bogeys in my first tournament back just shows there is not much winter rust to dust off! That score boosted me up the leaderboard into 16th and set up for a great last round.

It would have been nice to keep up the under par rounds for the year but a disappointing 74 (+2) to finish the week meant I fell back into 26th place.

Am I happy….? Yes and no… I played some great stuff throughout the week, but I guess as a professional you always want more! And that’s how it should be, you always want to get better, score better and finish higher, and that poor last round has given me another kick up the butt to keep working harder, as did the missed cut in Hong Kong! 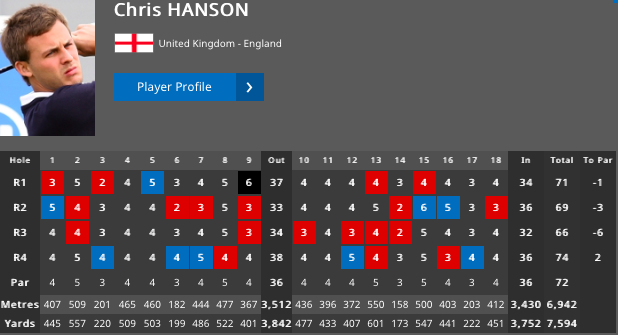 My week in numbers!

Having a look back through my scores and thinking about how the course played, I really didn’t make the most of the par 5’s throughout the week, I played the 4 par fives in -6 for the week, with three of those holes reachable with irons and the other reachable depending on the wind, so that is realistically 16 very good birdie/eagle chances.

You’ve only got to look at Rory and Jordan Smith’s cards to see they both played them in -13, and in round 4 Jeff Winther made 3 eagles on the par 5’s.

But another good week overall and something to keep building on going forward over the next three weeks in the Desert Swing!

I’m not sure I ever thought I would be teeing it up in the Dubai Desert Classic and playing the Desert Swing events, so they are three events I’m very excited to get stuck into, especially now Tiger has committed to playing the Classic!

Previous Story:
Back on the road – 2017!
Next Story:
NEW FACEBOOK PAGE LAUNCH!